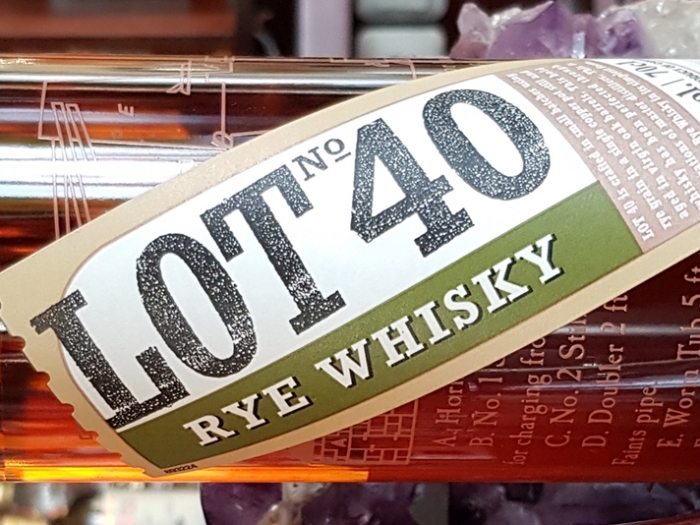 I have heard quite a bit about Canadian whisky and not all was very nice words. I have tried some that might have been on the cheep side and not really in my taste range, so in my ears Canadian whisky didn’t have the best reputation.
Ones taste buds change over time and to test that statement I challenge my self in trying whiskies I have tasted in my early whisky days to see if I like them better now. Some actually do and some definitely don’t.

I was sitting in the small cozy and well-stocked bar at the Hotel Spreeblick in Lübben, Germany, looking at the shelves when I spotted LOT 40 – Canadian Rye Whiskey. Why not taste it. I had not tasted it before and I like Rye Whiskey, so it could not go completely wrong.
At one point I think Thomas the own look at me like “Do you really mean this” but he was kind and served the whisky. He surprised me by saying it was a good Canadian whisky. Me expectation raised a bit.

I must say…. I like it and it can easily become fixtures on my shelf.

Why is the whisky actually called LOT 40?
The short story is …. Yes, you get the short one for the long one can be a bit complicated 😉
It started back in 1784 where Joshua Booth, a successful businessman, had some land where he had seven grist mills, one of which was on lot 40. It turns out that there were also distilleries in connection with these grist mills and here rye was made into whisky on pot stills.
The whisky made at that time we don’t know what was called.

Let’s turn the clock to 1998 because here is another mile stone. Six generations later, in honor of his great-great-great-great-grandfather, Mike Booth makes a rye whisky and calls it LOT 40. It was part of the Canadian Whiskey Guild series.
It was made from 90% unmalted rye and 10% malted rye, distilled on a pot still and matured on freshly emptied bourbon casks.
Unfortunately, LOT 40 was not a success at that time and lived only a few years.

It so happens that in 2012, former master blender David Doyle and current master blender Dr Don Livermore at Hiram-Walker revives LOT 40 and here we are, some years after, sipping fantastic LOT 40 Rye Whisky.
This time the recipe is 100% unmalted rye, distilled on a pot still and matured in new white oak barrels.

I don’t know what the earlier LOT 40 tasted like but this is a good experience.