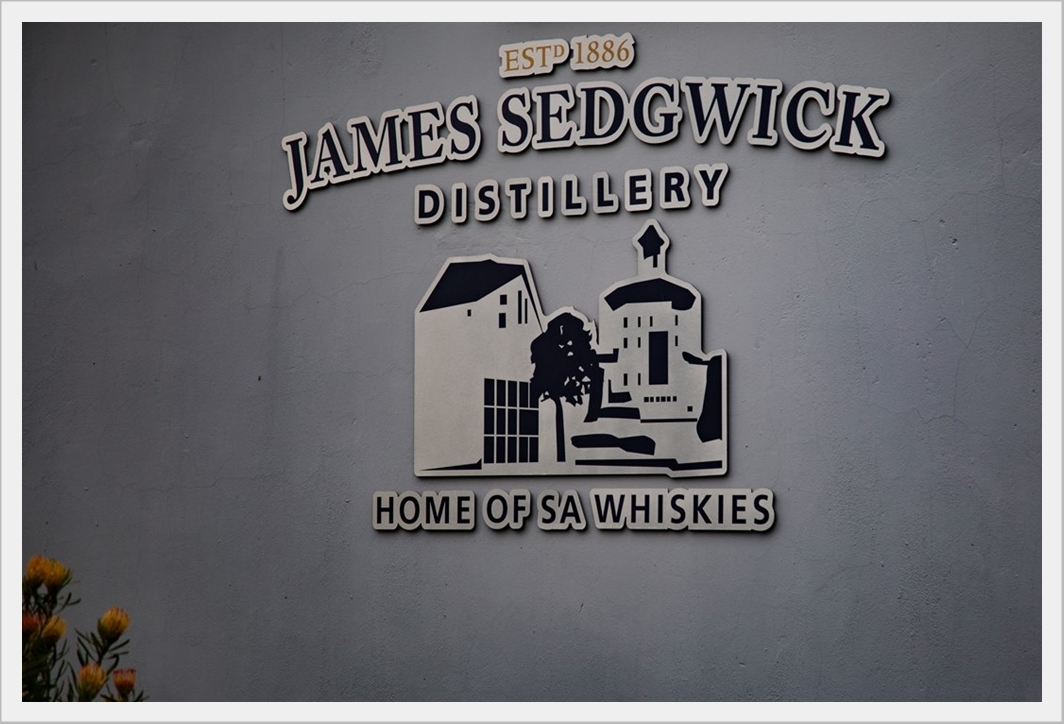 Just outside Paarl in South Africa, where Nelson Mandela was imprisoned for the last 7 years of his 28 years, lies Wellington and here we find The James Sedgwick Distillery – The Crown of South Africa’s Whisky.

The heat is increasing, but it is only at 27 degrees celsius. It is slightly cloudy and we are driven safely by Craig, our guide in SA, through townships, villages and wine country. It’s great to just sit with your nose against the windshield of the car and soak up all the diverse and contrast-filled impressions.

The goal of this morning’s tour is to visit The James Sedgwick Distillery and talk to Master Distiller Andy Watts.
I had written a bit back and forth with Andy Watts and look forward to the moment where I get to meet him.
The distillery was closed to the public today so we had been guided to the back gate and it gave me the opportunity to truly see it all from all angles.
The car parked and we enter the welcome area where we are welcomed with a refreshing cocktail. Short after Andy Watts arrives and we sat down to talk about; yes, what we’re there for – the story of Whisky and Andy.
Andy has run the Distillery for 25 years, but has today joined another constellation in Distell Group Ltd.. He is now in charge of all their whisky brands while still being the Master Distiller at the James Sedgwick distillery.
He is down to earth and an inspiring person to talk to. He got into the whisky business a bit by accident. He is English and played pro. Cricket and came to South Africa, fell in love with the country and then there was also a woman who pulled. Today they are married to each other but all that is a different story ☺️

Andy told stories and got into the technicalities throughout the distillery, making it a completely unique experience compared to a regular tourist trip, fantastically inspiring.
I am well aware that many distilleries have initiatives that purify return water, etc., but I am impressed by the enormous consideration that is on recycling and the environment at The James Sedgwick Distillery.
It takes a lot of water to make whisky, not only for the spirit itself, but even more in the cooling proces.
There is a shortage of water in South Africa and this makes them think more innovatively in order to recycle as much as possible. The water is purified and recycled and they collect CO2 and recycle it for use in beer and soda at one of the other sister companies.

Inside the control room, Andy told about the process and how much is computer controlled and how much is still manual, I noticed it said “Bowmore” over the two potstills and of course I had to ask how it was connected. It has to do with the fact that Andy has gained a large part of his experience from e.g. Bowmore, which he favours a lot, and therefore has called the boilers Bowmore. The pot stills are also formed as the ones at Bowmore.

The two pot stills each have a capacity of 20 000 L. The make the Malt whisky.

The distillery also have a two columns still for production of Grain whisky and a five column still for neutral spirit.

There is two Mash tuns and 16 Washbacks. These fermentation tanks have a thermo cape wit coolong to keep the yeast at 33*C.

Five warehouses are at all times holding 150 000 casks with maturing whisky. The Angel’s share is 5% in South Africa and there is a gorgeous smell in the warehouses.
They make Grain whisky nine months of the year and Malt whisky two months. Malt whisky is made during the South African winter as it is cooler temperatures and give a better fermentation. The last month of the year is used for maintenance.

Wow, this post is becoming a bit of a dissertation ….. I think I will jump forward a bit, because in addition to having a fantastic tour of the distillery, I also had a taste of the whiskies they make.

I have not even mentioned that Andy Watts at the World Whisky Awards (WWA) in 2018 was named the Global Icon Master Distiller/ Master Blender of the Year and at the WWA awards in 2020 he was named the Global Icon World Whisky Ambassador of the Year. Several of his whiskies have been awarded gold medals and in 2018 and Bain’s Single Grain has been named the world’s best in their category.

Be looking for my tasting notes in other posts.

What an experience!
These are some very excellent whiskies and I personally think it is a pity that they are not traded in Europe. Only Bain’s can be obtained in Germany which has been granted dealer rights. Three Ships we have to go to Africa or the US to get our fingers in.
I have had a sublime experience and if I ever come to South Africa again, The James Sedgwick is on the list of places to visit again.