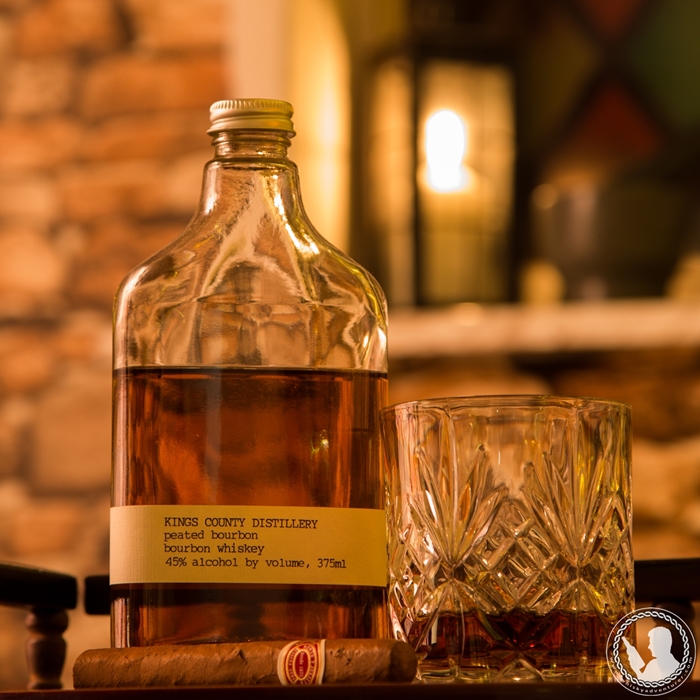 Peated Bourbon is that even real – Oh yes and for a peat head like me this is incredible stuff.

When I saw the bottle of Peated Bourbon I simple had to have it. I had never heard about Peated Bourbon and I was thinking – what in the world would this would be like and I actually had a picture in my head of corn being smoked over peat. Yes, I know crazy to think like that.
Well what is Peated Bourbon and is it actually a bourbon when peated?
Peated Bourbon from Kings County in New York is the first of it’s kind, of what I can find. It is made on a mash bill of 75% Corn and 25% Malted Barley.
So far so good.
The Corn is Organic New York grown and the Malted Barley is from Scotland. Here the barley has been malted and dried with the smoke from peat fire to a level of about 15 ppm.

It is normal that bourbon mash bills are made with malted barley to set off the fermentation proces and in this case we get the peated malted barley to do the job. To legally call American whiskey Bourbon you have to have 51% or more Corn in the mash bill, mature for at least 2 years in new oak barrels. It is not allowed to add colour or flavour. In this case all the bourbon meet all the requirements. The use of malted barley that has been dried over peat smoke is a natural way of drying, so everything is in order.

I bought this bottle in New York in september 2019 – Wow time flies fast, and I really wanted to visit Kings County Distillery, but time was to short for a visit at that time. Then we wanted to go to The Big Appel again in 2020 – but you know too well what happed in 2020 so we didn’t go. I really hope that I one day get the chance to visit the distillery. It has a great history to it, based in a old Navy Yard in Brooklyn. Founded in 2010 and is the first legal distillery since the Prohibition. I will write more about the distillery later and hopefully after a visit 🙂

It has taken me some time to open the bottle – Why? – I don’t know, but now it is open and I really like what I am tasting.
This is not very old bourbon, it is at least 2 years old, but you dont get that feeling when sipping it. One of the reasons for this is the use of small casks. They are American New Oak and the sizes used are 5 Gallon, 10 Gallons and 15 Gallons. That will be something like 19 litre, 38 litre and 57 litre. That size cask made of new oak will give you a lot of colour and taste in a short time. A 50 litre cask will in normal Scottish weather mature the spirits in year equal to about 4 years in a 225 litre barrel. So this Bourbon could be tasting like a 8-10 year old bourbon!

It is not a very peated whiskey but the smoke notes are there and the combination with the corn gives it a special experience in taste which I havn’t taste in other peated whiskies.

Would I buy this again? Yes I will

𝙍𝙚𝙡𝙚𝙖𝙨𝙚𝙙: First time released in 2016. At this time the mash bill was a little different. Only 12.5% peated malted barley was used.

All the way it is a nice bourbon with a fine mouthfeel and taste. You don’t get a smoke bombe or a peated Scotch – this has a special taste of it’s own. In some ways I think it offers more on the nose than the taste, but then again it gives you something unique on the taste – It’s just at very nice bourbon with a twist.